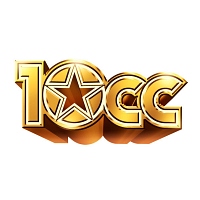 Few bands sum up seventies British pop like 10cc. A quick glance back at one of the band's many Top of the Pops appearances confirms it was a decade of flares, brown, Nylon and poorly conditioned hair. Like the era itself, 10cc's songs were also difficult to take seriously - for all their musical accomplishment and enormous success, there remained a sense that the five Manchester lads were sharing an in-joke.

Not that the public gave a Newton's Cradle. Post dinner party chat, about the outrageously sexy exploits of Charlie's Angels and whether Mr Byrite would get in anything like Starsky's latest cardigan, all took place against a soundtrack of 'I'm Not in Love', 'I'm Mandy, Fly Me', 'Dreadlock Holiday' and 'The Things We Do for Love'.

Each of those tracks was a big hit, not least 'I'm Not in Love' - a chart-topper here and a No 2 hit in the US. 'Rubber Bullets' and 'Dreadlock Holiday' completed 10cc's trio of UK No 1 singles and neatly summed up their eclecticism, sounding like three different bands.

After numerous line-up changes, including a reunion with the previously exiled Godley and Creme from 1991 to 1995 that resulted in two new studio albums, the 2011 version of 10cc still features founding member Graham Gouldman alongside Paul Burgess and Rick Fenn, both of whom have a more than three-decade association with the band. It's an authentic line-up that will no doubt continue to deliver a faithful slice of solid gold seventies pop.

10cc have announced three dates for May 2012, beginning at Liverpool Philharmonic Hall on the 5th, followed by St David's Hall in Cardiff and finally Birmingham's Symphony Hall on 7th May. More dates may yet be announced.

The band will also be in Birmingham in the run up to Christmas, with two appearances at Rock with Laughter 2011, alongside Gabrielle, Marti Pellow and comedians including Jimmy Carr. We have tickets available now, priced from £32.50 for the shows on Friday 16th and Saturday 17th December 2011.