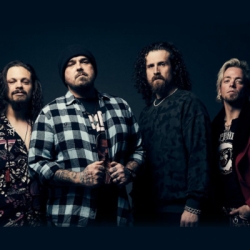 Sometimes, you can believe the hype or at least the buzz or word-of-mouth being spread about the 'next big rock band'. So, while all and sundry were getting a bit tired of stroppy frat-boys screaming and wailing like lost souls, straightforward classic rock was given a much-needed rain-check by these boys.

Drawing influences from Led Zeppelin, Lynyrd Skynyrd and perhaps a spot of Southern country and blues, Black Stone Cherry perform a more straightforward, but no less engaging, hybrid of the more acceptable side of American rock 'n' roll. With song-titles like "Rain Wizard", "Hell and High Water" and "Rollin' On", all from the their accomplished self-titled debut album, there's not much chance of them being confused with the brash L.A. swagger of Guns 'n Roses and Skid Row or the blood-curdling furore of Roadrunner label-mates, Trivium or DevilDriver. It's straight-up rock and it's rather good.

Follow-up albums, "Folklore and Superstition" and "Between the Devil and the Deep Blue Sea", suggest there's a bit of mileage in the Kentucky-born outfit - both reached #1 in the UK Rock charts upon release, with the latter actually cracking the main Top 20 back in May.

Not surprisingly, Black Stone Cherry are heading back to the UK for a series of gigs in March, starting in Norwich on the 11th, followed by Nottingham, Birmingham and many more including a trio of shows in Scotland (including Inverness!), before the whole jaunt concludes in London at the HMV Forum on 28th March. We will have tickets on sale from 9am Friday, priced at £16/£16.50 (£18.50 for London).

The band are currently supporting Creed-offshoots Alter Bridge on their headlining UK tour, with several dates left to play until 3rd December - if you want to catch them, you'll need to hurry for tickets, all priced at £24.50 - £26. Black Stone Cherry are also playing this year's metaltastic Hard Rock Hell V in Prestatyn on 3rd December.