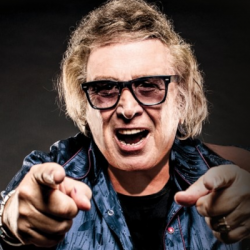 It is now four decades since Don McLean first recorded his album 'American Pie'. Back in early 1971, McLean was an American folk rock singer-songwriter putting together his second album and hoping to build on the muted commercial reception for his debut record a year earlier, 'Tapestry'.

Twelve months on, and McLean was a global megastar having produced, seemingly out of nowhere, his great work -the album's title track, eight-and-a-half minutes of American Pie. The song, of course, famously muses on the deaths, in a 1959 plane crash, of Buddy Holly, Ritchie Valens and the Big Bopper and coined the term 'the day the music died'. After the boundless optimism of the sixties in the US, the explosion of the hippy dream (at Woodstock) and its sudden demise (at Altamont), American music needed a line in the sand and Mclean's Magnum Opus was just that.

Its narrative cathartically guiding American popular music through its recent highs and lows, 'American Pie' emerges into a new decade with warmth and optimism. Audiences love that kind of thing and the song topped the US charts for a month, also reaching No 1 around the world (except in the UK where it was held off the top spot by Nilsson's 'Without You' - what a week).

The follow-up single was, if anything, even better. 'Vincent' oddly only made No 12 in the US but topped our chart and, with 'American Pie', etched a couple of untouchable American folk classics into music history, along with the name of the man who wrote them. There's even a plaque over the table at the New York bar where Mclean supposedly sat writing 'American Pie'.

The album of the same name also became a milestone and to celebrate its release 40 years ago, McLean is touring the record and his remaining back catalogue, including songs like 'Castles in the Air' and famous covers of Roy Orbison's 'Crying' and his hero Buddy Holly's 'Everyday'.

The American Pie 40th Anniversary tour kicks off on 19th October 2012 at Colston Hall in Bristol, before dates in Manchester, Gateshead, London (Royal Albert Hall), Birmingham and Liverpool, before the final gig at the Anvil in Basingstoke on 31st October 2012.