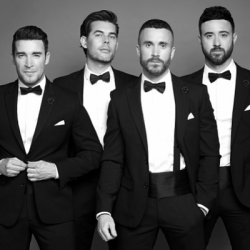 Here's an idea for a screenplay - no, a musical. Four lads fancy themselves as singers. So much so that they form a painting and decorating company so they can practice all day long. One day, while they are doing the cutting-in for a shop-fit in London's fashionable West End and practicing their exquisite close harmonies, who should walk by and accidentally overhear them but a top talent scout from one of the world's biggest record labels.

He immediately makes promises of cars and girls, and before the skirting boards are dry, our plucky decorators are signing a multi-album deal with Warner Bros.

That may not sound remotely plausible but it is exactly how The Overtones were formed, except for the promises of cars and girls (we made that up - a record label would never make promises).

The band's serendipitous discovery came in 2010 and, following a 2011 re-release, their debut LP 'Good Ol' Fashioned Love' peaked at No 4 on the UK chart and quickly found an audience. Having added a fifth member, Lachie Chapman, to the line-up, The Overtones were soon showing off their doo-wop skills supporting Peter Andre and appearing on ITV shows 'Dancing on Ice' and 'Britain's Got More Talent'. After their 2011 tour sold out, the boys have announced an extensive tour for later next year.

The Overtones kick off the huge tour in Ireland on 9th November 2012, with two gigs in Cork and then a show in Dublin on 11th November, before moving on to Belfast and then the UK mainland beginning in Newcastle on 23rd November. The Overtones then take in Carlisle, Llandudno, London (Hammersmith Apollo), Manchester, Brighton, Liverpool and more, before the final date in Plymouth on 20th December 2012.

We will have tickets for all UK dates they go on sale at 9AM/ 9:30AM on Friday 25th November, priced from around £30 for UK dates and 40 for the Ireland shows (which are already on sale).