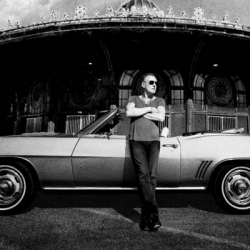 For nigh on 40 years, Bruce Springsteen ('The Boss') has been consistently pumping out memorable songs about American dreams and occasional nightmares. Sometimes the man chooses to do this in a power-rock mode with blazing guitars, soaring sax and pounding drums - hello to the albums, "Born to Run", "Born in the USA" and "The Rising". Then again, Bruce also often shows his reflective, saddened and weather-beaten side with the Americana desolation of "Nebraska" and most of "The Ghost of Tom Joad".

As well as his powerful anthems, his less-frenetic output is just as revered by his British fans and in 2012, it's 30 years since the acclaimed "Nebraska" was first released. You can expect a few songs from this, as well as all the usual classic Brucie bonuses. Sadly, his long-time buddy and saxophonist Clarence Clemons won't be around to deliver the trademark energy at next year's UK shows - but 'The Boss' certainly will.

His UK dates begin in at the Stadium Of Light in Sunderland on 21st June, followed by Manchester City's Etihad Stadium on the 22nd and then as a headliner at the Isle of Wight Festival on 24th June (that's the Sunday) and Hard Rock Calling again on 14th July (Saturday).

Tickets for the Isle of Wight Festival 2012 will go on sale from this Friday at 9am, with adult camping priced at £190, non camping at £160 and kids around half-price.

Whichever Springsteen turns up on stage next year, you can be sure he'll hold a huge captive audience - especially with the promise (no pun intended) of new material, his first for two years. His last live appearances in the UK were just over two years ago at Hard Rock Calling and Glastonbury and with the latter having a rest for 2012, the race is on for the ultimate stadium and festival gig. And they don't get much more 'stadium' than this man - he made a living out of it during the '80s as the UK began to buy into the Springsteen vision. "Born in the USA", "Cover Me" and "Dancing in the Dark" were all taken from one of the biggest-selling albums of the era.