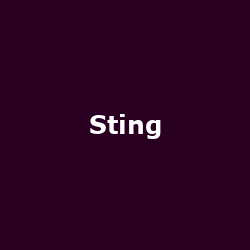 25 years ago, ex-Police-man Sting issued his first solo album, "The Dream of the Blue Turtles", a title that had many previous fans convulsing or running to the hills for sanctuary. However, despite the 'hippy' intonations of its moniker, the album has stood the test of time with the pop hits "If You Love Somebody Set Them Free", "Fortress Around Your Heart" and the moody "Russians". Basically, he shut his critics up and he's been doing it for the past quarter of a century.

"Nothing Like the Sun", released in 1987, proved that double-albums can be interesting - you'd have to be a hard person not to appreciate the work that went into "Englishman in New York" (about debonair extrovert Quentin Crisp) or "They Dance Alone". He hit paydirt with "The Soul Cages" and "Ten Summoner's Tales", the latter spawning the global hit, "Fields of Gold", an apt portent of things to come. He's had his 'curious' moments - an album of classical baroque music, "Songs from the Labyrinth" in 2006 and a winter-themed Christmas collection, "If On a Winter's Night" in 2009 - but his song-writing has generally been fairly robust.

His bass-playing isn't too bad either, something which many people forget was his chosen instrument in The Police and earlier solo recordings. So, with this in mind, his next tour of the UK should reflects on the man's expertise and musicianship. Called Back To Bass, the show has recently impressed American audiences enough to prompt Sting to head back to Europe with it. Assisted by Dominic and Rufus Miller on guitars, Vinnie Colaiuta on drums, Jo Lawry on vocals and Peter Tickell on fiddle, Sting will present stripped-back versions of songs from his recent box-set, "25 Years" and sister album "Best of 25 Years", some of which haven't been performed on his recent "Symphonicities" tour.

His UK stops include his home-turf of Gateshead on 5th Feb, before heading off around Europe and returning to Britain on 16th March for Manchester, then Glasgow (17th) and finally concluding in Hammersmith on 19th. Tickets are on general sale from this Friday, priced from £46.50 (£51.50 for London).