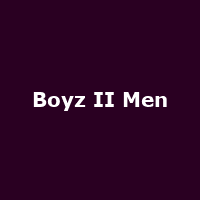 Two decades ago, four lads from Philadelphia formed an R&B vocal group with the unspectacular name of Boyz II Men. Within four or five years, they had pretty much redefined the mainstream R&B scene and were well on the way to shifting around 60 million records and laying claim to be the most successful R&B group ever.

Boyz II Men's UK breakthrough came with the 1992 single, 'End of the Road', which, accompanied by some extraordinary, gurning, eye-bursting vocal performances on 'Top of the Pops', swept the group to the top of the chart. A feat repeated from Amsterdam to Auckland.

The parent album, 'Cooleyhighharmony', was also a big hit, topping the US R&B chart and peaking at No 3 on the main Billboard countdown. The group's second and third LPs, 'II' and 'Evolution' both topped the US album chart.

The 'End of the Road' was just that in terms of UK No 1 singles but, in the US, the Boyz continued to smite all-comers, harmonising their way to the top of the hit parade with 'I'll Make Love To You', 'On Bended Knee' and in 1997, '4 Seasons of Loneliness'.

The four became three in 2003, when Michael McCary left due to health issues, but Boyz II Men ploughed on, making new records and enjoying something of a resurgence in late 2011 (so, now) with the latest LP, 'Twenty', which, pleasingly enough, was their first album to break into the US Top 20 since 2002's 'Full Circle'. A mixture of new material and re-recorded classics, 'Twenty' is an ideal tour record.

Boyz II Men kick off their short UK tour at Concorde 2 (II?) in Brighton on Friday 27th January, followed by the Brixton Academy and then Bristol, before the final date announced so far at the O2 Academy in Glasgow on Sunday 5th February 2012.