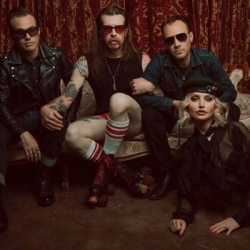 Jesse Hughes, who founded the Eagles of Death Metal with Josh Homme in 1998, has a collection of pseudonyms including the ominous 'The Devil', the unsettling 'Fabulous Weapon' and the curious 'Boots Electric'.

'The Eagles' went on another hiatus following 2008's 'Heart On', and 'Boots' kicked back into solo mode, eventually releasing a new record, 'Honkey Kong', in September this year. Boots Electric and his band had played their first ever live show just a month prior, in Columbus, Ohio.

Hughes has seemingly lived on the edge his whole life, and his music bears the lines and scars of rock'n'roll excess. Hughes and Homme purportedly became close friends at school when Homme stepped in to save Hughes from bullies. Later, Hughes would claim that his friend went much further, saving 'The Devil's life when his demons threatened to overthrow him through drug his addiction. Homme even drove his friend to the rehab clinic, which he also paid for.

Hughes has emerged as one of modern rock's most colourful characters, and with stories to tell. Something he'll be doing through the new material when he brings it to the UK early next year.

Boots Electric kicks off his UK tour at the O2 Academy in Birmingham on Friday 9th March, followed by dates in Manchester, Glasgow, Leeds, Nottingham, London (Relentless Garage) and Portsmouth, before the final gig of the run at Thekla in Bristol on Friday 16th March 2012. Eight gigs in eight days.

We have tickets available now for all dates, priced £12 except for London which is £13.50.