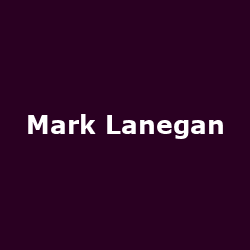 With the current resurgence of interest in Nirvana returning after the reissue of "Nevermind" and the recent promotion of Pearl Jam's life-story, cunningly titled as "Pearl Jam Twenty", Screaming Trees (the US rock band NOT the British electro-rock duo from the '80s) have probably not had the respect they should have had. OK, they didn't notch up huge album sales, nor did they toe the line for attention - but they did have Mark Lanegan on vocals. And by vocals, I mean whisky-soaked, Rothmans-ravaged, tin-tack gargled vocals.

And it isn't just Screaming Trees that Lanegan has soundtracked - Queens of the Stone Age and Greg Dulli's Twilight Singers and The Gutter Twins have also experienced THAT growl. But it's his solo work that has had critics shovelling complimentary superlatives in his direction, from 1990's debut foray into solitude "The Winding Sheet", through 1994's "Whiskey for the Holy Ghost", right up to his most recent solo set, "Butterflies", issued seven years ago. That last album proved to be a near-crossover success, reaching the Top 50 in eight countries including the UK, and with continued adoration for his desolate collaborative work with singer Isobel Campbell, previously of Belle and Sebastian, Lanegan is finally on the right side of the critics.

His next album sees him move from Beggars Banquet to sister-label 4AD - "Blues Funeral" sees the light of day in February next year and features guests such as old muckers, Josh Homme and Greg Dulli. It's probably going to be rather special. Indeed you will be able to judge for yourselves if you catch him on tour at around the same time. As part of a European tour, Lanegan will be stopping off in the UK and Ireland with his band for a cluster of shows, beginning with Bristol on 4th March, followed by Manchester, Dublin, Belfast, Glasgow, Leeds, Birmingham and finally, on 13th March, Shepherd's Bush Empire.

Tickets go on sale Monday 14th November at 9am, all priced at around £17 (more for London).