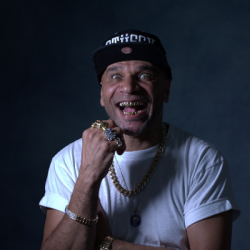 Goldie, Emalkay, 16bit and many more DJs and artists will be gathering in London on 12th November 2011 for the final session of Bass Wars, supported by The Playground and hosted by Camden venue, KOKO.

Drum 'n' bass and jungle warlord Goldie, is one of the more familiar faces from the scene. He founded the iconic (and consistently pioneering) Metalheadz label, responsible for dozens of classic 12" singles including Goldie's own Rufige Kru with "T3" and "VIP Drumz", Doc Scott's "Far Away", Alex Reece's "Pulp Fiction" and Photek's "Natural Born Killa".

Emalkay and 16bit represent the technical end of dubstep and wobble, with the former releasing a prolific stream of top tunes such as "Crunk In Space", "Explicit" and the recent "Fabrication 12" for Caspa's Dub Police imprint. 16Bit continue the theme of old-skool and darkness and have recently inked a deal with Morethanalot Records (owned by Chase and Status).

Recently we ran a competition to win three pairs of tickets to Bass Wars (which has now sold out!) and we can now reveal the lucky clubbers!! They are Tom Davin, Natasha Dewji and Andy Harkin - congratulations to you three and enjoy!!