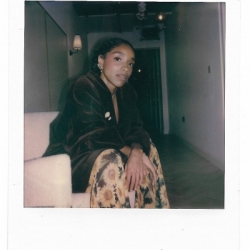 Part of the beauty of uncovering artists like Lianne La Havas is that although it is fairly obvious they're going to be a bit of a star, there's always a moment at the start of their career when you can catch them live for around the price of a two-night DVD rental. And it's usually a lot more fun.

Born in London in the late eighties to Greek and Jamaican parents, Lianne La Havas produces sunny, soulful pop with an exotic hallmark. Her performance of 'Age' on 'Later with Jools Holland' earned her widespread recognition and a slot supporting Bon Iver, who was on the same show.

'Age' comes from her debut EP, 'Lost & Found', released the day of the 'Later' performance and hints at the likely content of her debut album, set for release in 2012. After a handful of live UK dates this autumn, La Havas heads off to Canada and the US with Bon Iver for a series of December shows, before returning to the UK and a four-date residency in London.

Her autumn tour kicks off at the (brilliantly named) Nation of Shopkeepers in Leeds on 15th November, followed by dates in Glasgow, Edinburgh, Bristol, Salford and Nottingham, before the final date in London at the Old Shoreditch Station on 23rd November.

Both Leeds and London gigs are sold out. The Salford date had previously also sold out but has now moved to a bigger venue. We have tickets for all available autumn dates on sale now, priced from just a fiver.

In the New Year, Lianne La Havas sets up camp for four consecutive Tuesday nights at The Social in London, beginning on 17th January with the last show on Tuesday 7th February.

We will have tickets for The Social residency when they go on sale at 9AM on Friday 4th November, priced £9. Bargain. Get it booked - those DVDs can wait.