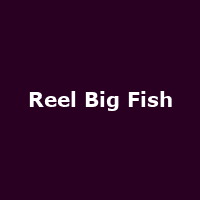 In the late nineties, Reel Big Fish looked like they were going to be reel big. Ska-rock was once again finding itself in the music scene's warm embrace and the (then) six-piece from LA were right there, at the 'b' of the bang.

After lead vocalist Ben Guzman left in 1994, Aaron Bennett took over as frontman, a job he still holds down now as the only founding member. In fact, the list of former members is more than a dozen names in length and hints at the rollercoaster 'RBF' have been on.

Feted by the music press, their debut 1995 LP 'Everything Sucks' was a launchpad for two more Billboard 100 hit albums and a deal with Mojo Records. In 2006, whilst on tour and not long after the release of their fifth record, 'We're Not Happy 'til You're Not Happy', RBF were dropped by their then label, Jive Records. Ska was being pushed underground.

RBF formed their own label, shuffled the line-up once more and continued where they left off. The underworld suited them and far from disappearing altogether, RBF have established a place in the affection of music fans across the world. With a new record on its way and Aaron Bennett seemingly recovered from the illness that wiped out a few dates earlier this year, Reel Big Fish are currently on a huge tour of the Americas before visiting Europe early next year.

The UK tour kicks off in Birmingham at the O2 Academy on Friday 27th January, followed by shows in Nottingham, Newcastle, Manchester, Reading, Yeovil and Norwich, before the final date at London's Shepherds Bush Empire on Thursday 9th February 2012.

We will have tickets for all dates when they go on sale at 9AM on Friday 4th November, priced from around £14.