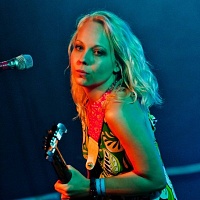 Most kids at 3 years old probably spend most of their free-time glued to the TV, scampering around the house with a tummy full of breakfast, crying, playing games, running around some more and bringing up their breakfast onto the new carpet or the babysitter's lap. When exciting new blues-singer Chantel McGregor was at the tender age of 3 years old, she started playing acoustic guitar - as you do. By 8 years old, she was realizing that electric guitars make a bigger noise and passed a Rockschool exam, just to prove how good she was.

During her teenage years, she parked the music-career for a while to concentrate on becoming a teacher. After the slight distractions of passing A levels and gaining daft amounts of music qualifications, she chose to pick up a guitar again instead of a pen or a laptop - thank God for that!

So, from child and teen prodigy to almost-an-English-teacher, she's now an 'artiste', proven by several live shows under her belt and a whole load more to come, plus a brand spanking new award for the mantelpiece and a new album. The reward for all that hard work was no less than the British Blues Award for Young Artist of the Year, joining the ranks of other winners including Ian Siegal, Joanne Shaw Taylor, Paul Jones and Joe Bonamassa - esteemed company indeed.

The new album, "Like No Other", released earlier this year will be supported by a clutch of shows, starting with Morecambe on 25th November, then stops in Grimsby, Derby, Hull and more until heading south to Broadstairs and finally, the world-famous 100 Club in London next summer. All shows are available, ranging in price from £9 to £11.