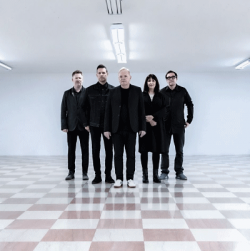 I could write 30,000 words about how important New Order have been to British pop, rock and dance music, but I won't. I won't mention the legend of "Blue Monday" STILL being the biggest-selling 12" single of all time (since 1983), or that, for every copy sold, it lost the band anything from 2p to 5p every time (making it possibly the worst grossing record ever - well, that's apart from all the other Factory releases).

I won't mention how the band rarely saw a penny that went into their nightclub, The Hacienda, even when their bloody records were being played on club-nights. I won't babble on about how great "The Perfect Kiss" 12" is - or "True Faith". Or "Temptation". Or "Confusion", ably mixed by Arthur Baker. Or how "Everything's Gone Green" was the benchmark for rock bands to start dancing. I certainly won't mention Peter Hook (although I'd love to) and I won't even mention how great it would be to see New Order live again, with or without their enigmatic bassist. Love (or hate) has indeed torn them apart.

I'll just tell you that New Order are playing London's Troxy on 10th December and that tickets (£32.50) are on sale Friday at 9am. Why? Recently, Sumner, Gilbert, Morris, Cunningham and Chapman (the latter pair from Bernard's other group, Bad Lieutenant) performed to triumphant shows in Paris and Brussels as a gesture to their close-friend and video-wizard, Michael Shamberg, who is currently battling a debilitating illness (since 2005). It is expected that this show will continue the theme of fund-raising for the man who directed New Order through "True Faith", "Regret" and "Touched by the Hand Of God".