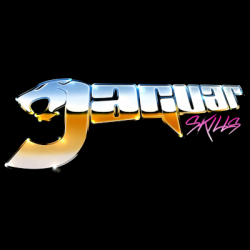 Not since the days of ITV Saturday lunchtime wrestling legend Kendo Nagasaki has a Japanese warrior's mask been deployed to such effect as when the mysterious Jaguar Skills takes to the decks in full ninja get-up.

His big break came in 2004 when Jade Jagger recruited him for her Jezebel club nights in Ibiza. A residency followed and soon Jaguar Skills could be seen roundhousing his way around the world with the Jezebel tour.

Despite (or perhaps because of) his desire to remain anonymous, Jaguar Skills has built a loyal following and a status that has earned him plenty of air time on Radio 1 and Radio 1Xtra, producing 10-minute mixes for Trevor Nelson's Saturday evening show.

His mixtapes have aired consistently on the radio since 2006 and, coupled with his charismatic live shows, have earned the mysterious ninja a reputation for thrilling live audiences with his showmanship almost as much as his music.

Anyone who saw it can recall the thrill of seeing Kendo Nagasaki theatrically unmasked (and revealed to be plain old Peter Thornley), but so far Jaguar Skills has managed to keep his true identity more or less secret; only known for sure by a handful of backstagers at Radio 1. Until the mask drops, Jaguar Skills' live shows will continue to have the additional ingredient that makes them such fun.

Jaguar Skills' 2012 tour kicks off at Sankey's in Manchester on Friday 24th February, followed by gigs in London (Scala), Norwich and Birmingham, before the final date announced so far at the O2 Academy in Oxford on Friday 30th March.

We will have tickets available for all dates when they go on sale at 9AM on Friday 4th November 2011, priced £15.

Ahead of the 2012 gigs, Jaguar Skills continues his 2011 Winter Tour next week in Bournemouth (2nd November), Nottingham (4th) and Liverpool (5th). We still have tickets for all latter shows, priced around £10.