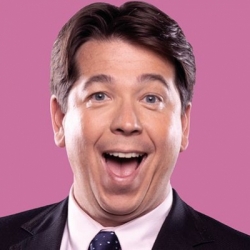 As previously reported, Michael McIntyre's previously-announced and now almost all-sold-out massive tour kicks off with EIGHT consecutive dates at the Motorpoint Cardiff Arena from Wednesday 22nd August 2012. There are then more dates at Nottingham's Capital FM Arena from Monday 3rd September, more at the NIA, Birmingham and another half-dozen at London's O2. October sees shows in Sheffield, Belfast and then a run at Manchester's MEN Arena. Glasgow, Newcastle, Dublin and Liverpool all see two to four gigs before the tour closes with six more London dates, this time at Wembley Arena from Wednesday 28th November to Monday 3rd December.

Our Stewart needed a lie-down after listing that little lot in his previous article - but there's no time for sleeping on the job now because Michael McIntyre has only gone and added yet more shows to satisfy public demand!

The extra shows are for Birmingham on 14th and 15th September, London (O2 Arena) on 5th and 6th October and Belfast on 17th and 18th October. Tickets are on sale right now, priced at £35. As with his previous shows, these won't hang about for long!

With regards to his other 2012 shows, tickets are still available for most of them, although shows held on Friday and Saturday evenings are close to running out of the best seats in some cases (Cardiff, Nottingham and other London dates).