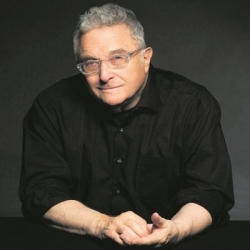 At some point in your life, either when listening to the radio, watching a movie or surfing the net for music-chart statistics, you will have stumbled across something composed by American songwriter, Randy Newman, either by accident or by doing some digging. Put it this way, he's been composing since he was 17 - he turns 68 in a month's time - and written a LOT of music.

For a start, his many songs have provided food in the fridge for other artists. "Mama Told Me (Not To Come)", with or without the brackets, is possibly his biggest crossover success over here, due to its maximum-volume conversion by Tom Jones and Stereophonics in 2000, preceded by versions from artists as diverse as 'Sweet Soul Music' shouter, Wilson Pickett, quirky US rockers Three Dog Night (who turned into a #1 hit) and the bonkers avant-garde 4AD outfit, The Wolfgang Press. His other biggies include "Sail Away" and "I Think it's Going to Rain Today", the latter a double 'A' side for UB40 ("My Way of Thinking" was the radio choice on the single).

But Newman's real forte has been film-soundtracks - he's been involved in box-office breaking animation such as Toy Story, Cars and A Bug's Life, comedy triumphs (and mis-hits) Parenthood, Meet the Parents (and Fockers) and Pleasantville and the serious Ragtime, one of his earlier cinematic forays. When Newman shoots, he scores.

He also loves to perform live, but it's been a while since his last visit to the UK, and even longer since he last toured. That's all about to change with the announcement of a new European tour next year, including shows in the UK and Ireland, plus the preceding release of the CD/ DVD package, "Live in London", recorded during his 2008 "Harps and Angels" show with the LSO (due 8th November).

For his 2012 shows, Newman will perform songs from the new set featuring the aforementioned trio of classics, plus others from the 22-strong tracklist. His tour kicks off in the UK in Gateshead on 22nd February, followed by Glasgow on the 24th before heading to Belgium for 2 shows. Newman then returns to England with a show at the Royal Festival Hall on the 28th and a pair of evenings in Dublin on 1st and 2nd March. Our man then resumes his European tour by pinballing around Northern Europe!

Tickets for the UK and Ireland shows are available from us now, except the Royal Festival show in London which goes on sale from 10am tomorrow (Friday). Prices vary from £35 for Glasgow, to £45 for London (55 for Dublin).