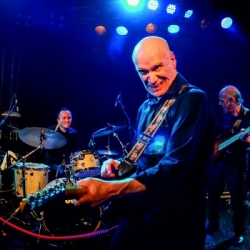 There's no denying it - Ian Dury and the Blockheads were a formidable force when it came to live shows. Naturally, being the band's frontman, Dury himself earned props for the vitality, verve and vigour achieved by a lyricist at the top of his game. Behind him though, a class live act powered their way through the classics such as "Hit Me with Your Rhythm Stick" and "What A Waste".

Meanwhile, a certain Wilko Johnson was winding up his relationship with blues-rockers, Dr Feelgood, and founding his own Wilko Johnson Band. By 1980, Dury and Johnson converged and the latter joined his crack bunch of Blockheads, with the fearsome guitarist contributing to the band's "Laughter" album, including the excellent, "Sueperman's Big Sister" (sic) single and continuing the Blockheads' live legacy, whilst also working with his own band.

Three decades later, the Blockheads connection continues with Johnson - his current sparring partners on stage are previous Dury stooges, bassist Norman Watt-Roy and drummer Dylan Howe, whilst his former career with Dr Feelgood came under the spotlight in 2009 with the DVD release of the band's documentary, "Oil City Confidential", a broad reference to their home-turf of Canvey Island.

And it's biographical events that will be featuring heavily in Johnson's calendar in 2012, when EMI will be issuing a Dr Feelgood box-set, Johnson's autobiography "Looking Back At Me" (written in association with Zoë Howe) gets published in the spring and Fender will be producing a limited run of a Stratocaster based on Johnson's 1962 model. But, there is a forward-thinking element to all of this - Wilko is working on a new album, some of which may rear its head during his lengthy 2012 tour.

First stop will be Buxton on 5th April, followed by Sale, Clitheroe, Newbury, Tavistock and many more until Bridport on the 29th. Tickets will be available here from Friday, priced at £17.50. Joining Wilko, Watt-Roy and Howe will be special guests, Virgil and the Accelerators.