Posted: 18th May 2012
The pop star, raconteur, Londoner and archetypal Nutty Boy is taking his Life Story back on the road later this year, tickets available now 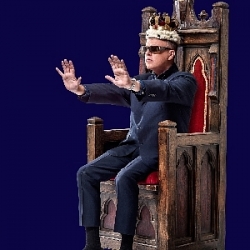 Suggs began his life in Hastings as plain ole Graham McPherson. More than 50 years later, Suggs remains the iconic frontman of pop-ska giants Madness, has juggled successful careers as a solo artist, a television and radio presenter, a writer and, now, it seems, as something of a stand-up comic and storyteller.

In this latest incarnation, Suggs has been touring telling his 'life story', so filling in the blanks of those 50 years with inimitable bonhomie and customary humility. Plus, of course, there's a few of the finest pop songs of the last three decades and plenty of laughs from a man who knows all about comic timing. The last Life Story tour was extremely popular and received with wide, warm acclaim. Consequently, Suggs is taking his compelling story on tour once more.

The new tour kicks off with a date in July, in Bridport, before resuming at the end of September. Suggs visits Aberystwyth, Caernarfon, Scunthorpe, Ipswich and more, before the final date announced so far at Leas Cliff Hall in Folkstone on 9th October 2012.

We have tickets available now, generally priced £24.50. Suggs enjoys an enduring popularity and much of the last tour sold out so do not delay.