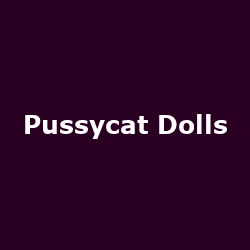 Purring, winsome, one-time Pussycat Doll and sometime Formula 1 superfan Nicole Scherzinger is bringing her Scrabble-winning surname and her new solo material to the UK for the first time next year.

The Pussycat Dolls may have released just two albums in the five years before their late 2010 break-up/hiatus, but their impact extended far beyond the two LPs. Both 2005's 'PCD' and follow up 'Doll Domination', released three years later, performed well, reaching the top ten of charts all around the world but it was the Pussycat Dolls brand that became their greatest asset.

Signalled by their debut single 'Don't Cha', which topped charts pretty much everywhere (except the US), the Pussycat Dolls were received as feisty, strong, independent women; which was really refreshing and definitely not a hackneyed stereotype. In any case, the world quickly warmed to the Dolls, their music and their Pussycat-in-chief, Nicole Scherzinger.

As the One At The Front, Nicole already enjoyed a higher profile than the other girls, helped considerably by her winning turn on 'Dancing with the Stars' (the US version of 'Strictly Come Dancing'), her role as a judge on X Factor USA (in place of the incomprehensible Cheryl Cole) and her appearances at virtually every Formula 1 Grand Prix since 2008, when she began dating driver Lewis Hamilton.

Scherzinger's debut solo album, 'Killer Love', was first released in March 2011, with the second single from the record, 'Don't Hold Your Breath', hitting the top of the UK chart thanks to first-week sales of nearly 100,000. Following next month's re-release of 'Killer Love', Scherzinger will be making her first UK headline tour appearances in 2012.

Three dates have so far been announced for Nicole Scherzinger's solo tour, beginning in London at the Hammersmith Apollo on Sunday 19th February, followed by the Manchester Apollo on the 22nd and finally the Birmingham Academy on Thursday 23rd February 2012.

We will have tickets for all dates when they go on sale at 9AM on Friday 28th October, from £25.