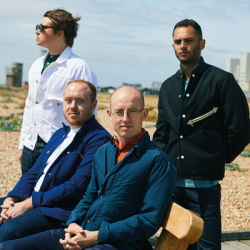 Active since 2005, Messrs MacColl, Roberts, Steadman and de Seram weren't happy with a bandname of The Canals, settling instead for the spicier option of Bombay Bicycle Club, named after a chain of London restaurants. After winning Virgin Mobile's 2006 Road to V competition - and a place on stage during the V Festival - there was no looking back. I should mention that the band were hardly out of school-uniform at this stage, although it did take a few years later for their first album to appear.

Since "I Had The Blues But I Shook Them Loose" appeared in 2009, the lads have gone from strength to strength, appearing at pretty much every music festival and gaining a reputation as a mean live outfit - they were given the 2010 NME Award for Best New Band just to cap things off. Things improved even more with a Top 10 placing for album #2, "Flaws", but it was their third album where they finally grew up - "A Different Kind Of Fix" hit #6 in September and revealed a band more-at-ease, epitomized by the singles "Shuffle" and "Lights Out, Words Gone".

Still an inviting prospect in concert, Bombay Bicycle Club have just finished touring the UK - and are set to do it all again next spring! The band have just announced shows in Cambridge (15th April), Brighton (16th), Wolverhampton (17th) and many more until rounding it all off at London's Alexandra Palace on the 28th.

Prices start at £17.50 and we will have tickets from Friday at 9am. They sold out their last tour and there's no reason why they won't again.