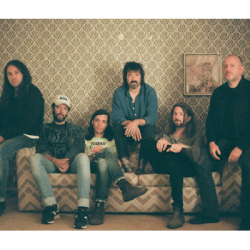 Every so often, I stumble across a band that possesses a knack of deftly mixing pretty songs with ear-blasting music - ladies and gentlemen, I've found another one. The War On Drugs have actually been around for half a decade, but this year delivered a cracking new album that mixes the buzzy, druggy haze of Spacemen 3 or Spiritualized with the tripped-out surf-pop of Midlake or Kurt Vile - and that's no great surprise, considering that Vile was a previous member until a line-up clearout in 2008.

Signed to leading American indie-label, Secretly Canadian (home to Animal Collective, Damien Jurado, Antony and the Johnsons, Yeasayer and the marvellously-named, Swearing at Motorists), The War On Drugs have previously issued a string of EPs (including last year's "Future Weather") and an album, "Wagonwheel Blues", in 2008. All were the sound of band nudging the edges of psychedelic and alternative pop and rock, but nothing on a scale of what awaits you on "Slave Ambient", released last month. It's a grandiose and modern take on US songwriters like Petty and Springsteen, minus the 'rocking out', plus the inclusion of synths and feedback. Yum.

And they're coming to the UK/Ireland in 2012 with a slew of tour-dates, starting with Liverpool on 23rd February, followed by Dublin, Glasgow, Manchester, Camden, Brighton and Bristol. Tickets are on sale now, priced from £9 upwards. Dublin is 16.50.

Meanwhile, check out one of their most recent videos, the decidedly bouncy and frenetic single, "Baby Missiles".