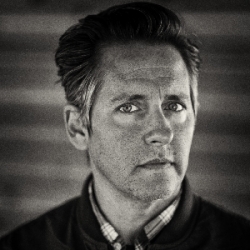 With the current crop of singer-songwriters garnering acclaim and sales (hello Ed and Ben), it's easy to forget those that have been plugging away at it for several years. American Josh Rouse fits the bill perfectly - since the late '90s he's been quietly crafting thoughtful, plaintive and occasionally sprightly songs, designed with one eye on sunny skies and the other on the nearest umbrella.

From his debut set in 1998, "Dressed Up Like Nebraska", up to last year's self-produced and self-financed "El Turista", the pastoral pop engineer has rarely riffed, nor has he screamed. 2003's "1972" album, possibly his most instrumentally-enriched set ('70s influenced strings and keyboards and introspective melancholia abounds), remains one of his best, although 2005's "Nashville" is his only chart success - until now, that is.

See that embedded player over there, to the right? Click on that to stream Josh Rouse's new album, "Josh Rouse and the Long Vacations", which just happens to be the name of his band. Nine songs from the collection clearly demonstrate where the man and his men are heading, with a little bit of Bacharach and a hint of Harper in the mix, with a spring in the step and an almost-jazz or lounge feel in places.

To promote the album (you can also stream it at his website), Rouse and those Lost Vacations will be hitting the UK next year, starting with Gateshead on 22nd January, followed by Nottingham (25th), Liverpool (26th) and the Union Chapel in Islington on 28th. More shows may be added soon - meanwhile tickets cost up to £18.50 and are on sale now. That London show is in danger of selling out very quickly, by the way.