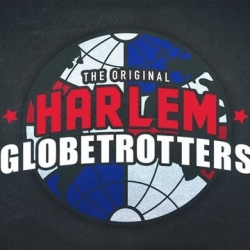 It is 1984 and, in the final year of primary school, an 11-year-old boy is completing his entry on the school's yearbook-style wall chart with the aim of making him seem as cool as possible. Favourite food: sausages (obviously). Favourite film: Star Wars. Favourite pop group: The Harlem Globetrotters.

Now, kids are rightly forgiven most things, even actual crimes, and his misunderstanding about what function the Harlem Globetrotters actually perform is understandable. His confusion came from the (then) still frequently aired seventies cartoon series based on The Jackson Five, which featured a flare-trousered Michael, Jermaine and co. He'd also seen the Harlem Globetrotters animated show from the same era and confused the two, assuming the Globetrotters sang songs.

The Harlem Globetrotters may not be Motown recording legends but they do have a rich history of entertaining audiences worldwide. Originally from Chicago, the Globetrotters have, in their 80-or-so years, dabbled time and again in competitive basketball but mostly they have played one-sided exhibition games, often against a stooge team. That said, the team has also enjoyed a number of key professional wins, most notably in the forties and fifties.

They also blazed a trail for black sport in the US, competing against all-white professional basketball teams and contributing to the lifting of the NBA's so called 'colour line' that precluded teams from fielding African-American players.

Nowadays, the Globetrotters continue to dabble in competitive fixtures now and then but mostly perform exhibition games with dazzling skills, gravity-defying slam-dunks, laughs, thrills and spills. They remain enduringly popular and, never an 'all-star' team, have nonetheless managed to maintain high professional standards and hold an almost unique position in world sport. They also once went on an 8,000-plus game winning streak.

The Harlem Globetrotters will be dribbling their way around the UK beginning in Nottingham on 21st March, followed by Cardiff, Sheffield, Newcastle, Aberdeen, London (Wembley Arena), Birmingham and Manchester, before the last show at the Liverpool Echo Arena on 29th March 2012.