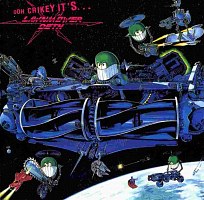 Holiday villages have become unlikely sources of income for the likes of Butlins and Pontins in recent years, with Minehead and Prestatyn respectively being regular venues for music festivals, including ATP Festivals and a Madness Weekender booked up at the former, while the latter has Hard Rock Hell V and the Tidy Christmas Weekender 2011 packing out the cabins.

Prestatyn will also host the fourth edition of the Hammerfest Festival for 2012. Founded in 2009, Hammerfest is an institution organized by those that bring you Hard Rock Hell and the Metal Hammer magazine. It normally sells out, and with a capacity of 4,000 hungry rock-fans in attendance, that's a lot of cabins, burgers and beers sold straight away. Basically, its all indoors - what's not to like?

Previous headliners have included Saxon, Opeth, Suicidal Tendencies, Napalm Death, Accept and many more - 2012 continues the line-up chops. Next year's headliners are Anthrax and Skindred, both bands more than capable of packing their own shows to capacity, but if you are wavering over that pairing, you also have Paradise Lost, Lawnmower Deth, Chimaira and Virus in full glory, as well as a rare appearance from Hell, a UK rock-band who formed in 1983 and have only just got round to issuing their debut album set 28 years later!

Tickets and accommodation are available to buy from us now, with prices starting from £322 for a Silver 1-bedroom cabin for two people and continuing up to £1022 for a Gold two-bedroom chalet for up to 7 people. Spread between your mates etc, you could end up paying as little as £120 each for the whole weekend which takes place on Friday 16th and Saturday 17th March - there's also a pre-fest party on Thursday night!.

More names are due to be announced in due course.