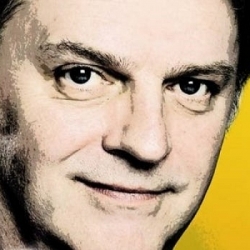 Paul Merton's standing as a leading wit and a comic entertainer has, in recent years, owed little to his reputation as a stand-up comedian, although that is where he began. He is now best known as one of the two regular contributors on the long-running BBC panel show 'Have I Got News For You?'

'HIGNFY' is the programme that every TV panel show conceived since has tried to emulate. It was not the first of its kind but, now into its 42nd series and 22nd year, it is the longest running BBC panel show ever. In that time, Ian Hislop and Paul Merton have book-ended every panel assembled and, without fail, have been relied upon for many of the shows finest contributions.

Those with long enough memories will recall Paul's stint on the improvisation show 'Whose Line is it Anyway?' which rode Channel 4's wave of exciting new television comedy at the end of the 1980s. For five years, along with Tony Slattery, Josie Lawrence and one or two others, Paul Merton made up the 'Whose Line' A-team; sparkling weekly with their all-too-clever improvisations and electric wit.

In the many years and 354 'Have I Got News For You?' episodes since, Paul Merton's brain has earned him a number of writing credits and a clutch of radio and television shows about, mostly, the history of comedy and his own comic heroes, both writers and performers.

The key to Paul Merton's comedy, his success in 'HIGNFY' and 'Whose Line', and in his continuing improv appearances at London's Comedy Store, is his acutely sharp, lightning quick mind and his canny knack for finding the absurd in the ordinary.

After more than a decade away, Paul Merton is returning to stand-up (after a fashion) later this month, with a show that promises 'sketches, music, magic, variety and dancing girls'. The 'Out of My Head' show will feature three of his Comedy Store cohorts Lee Simpson, Richard Vranch (the comedy pianist from 'Whose Line') and Suki Webster.

The tour kicks off in Perth on 26th March followed by gigs in Richmond (Surrey), Aylesbury, Wimbledon and more, before an autumn residency at London's Vaudeville Theatre (where else?), which runs from the 1st to 20th October.

We have tickets available now for a selection of dates, with the London run priced £21.