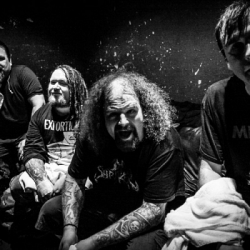 The late '80s were, in some ways, quite an exciting musical period - new romantics had been pretty much put to bed and fey pin-ups were being replaced by house-music's anonymity and hip-hop's raggedy-ass. Those needing something far more powerful plumped for the solitude of metal. Trouble is, as a genre, it still had the likes of Whitesnake, Poison, Guns N' Roses and Cinderella preening themselves and singing about heartbreak, paradise and wearing shiny boots and leather (or Spandex - that stuff makes Lycra seem fashionable).

So, as a rebellious teenager with a penchant for 'sticking it to the man' (or at least sticking your gum on the bus seat after use), you'd dive head-first into some unadulterated and extreme ultra-thrash, as you do. Labels such as Peaceville, Noise International, Steamhammer, Nuclear Blast and Earache knocked out a veritable flood of fiercely independent and brain-mangling metal, the latter example probably leading the pack for many years (1988-1995, springs to mind). And they were UK-based (more recently also based in the US).

As well as a roster that boasted speed-thrash and stoner-sludge acts like Extreme Noise Terror, Spazztic Blurr, Bolt Thrower and Lawnmower Deth, no band touched the nervous system quite like Napalm Death. Their first album, "Scum", proved to be a pivotal release for Earache - it cost less than £100 to make and John Peel frequently caned tracks from it. The main attraction for punters was the sheer speed and maximum volume at which the tracks were presented and performed live at concerts - if you weren't deafened by the music, you'd be crushed to death as 12-stone Tony once again stage-dives on top of you like a sack of carrots. Songs lasted around a minute - check out our extreme example above. "You Suffer" is something of legend.

Nowadays, Napalm Death keep the volume just as loud but the songs are longer and more structured, something you can witness on their tour this autumn. First stop is Dundee on 24th November, followed by stops in York, Manchester and more, including a special homecoming show in Birmingham on 8th December (on sale Monday), Sheffield (also on sale Monday) and finally the Camden Underworld on 16th December. Tickets cost £15 or £16.50 - some of those shows are going to sell quickly!