Laughter is the Best Medicine, prescribed by Stephen K Amos in his autumn 2011 UK tour 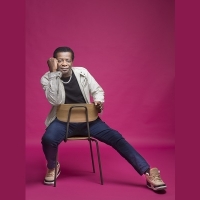 Stephen K Amos has emerged as an enormously popular comedian with a gift for effortless charm and a boyish, mischievous enthusiasm. His success owes as much to his warm, likeable, open manner as it does to his needle-sharp observations and ability to find 'the funny' in the most unexpected places.

Amos' early career was as a highly successful compere, with his natural style making him an ideal master of ceremonies. Don't take my word for it, in 2004, 2007 and 2008 he was nominated for Chortle's Best Compere Award.

Honing his solo stand-up skills all the while, he made his Edinburgh debut in 2001, returning in 2003 and every year since. In 2006 he used his show 'All of Me' to reveal to his audience that he was gay. It was typical of Amos' open approach to his craft and that it remains largely incidental to his career is a reflection of the quality of his comedy. With the gay, black comedian card ready to go, Amos has never played it. Why would he. He is simply a very funny guy.

And he is much-loved. Something evidenced time and time again by sold-out venues and additional dates due to exceptional demand. As his Best Medicine tour continues, new dates have kept popping up and there are now just a (big) handful remaining.

The tour continues at the Redhill Harlequin Theatre on 20th October, moving on to Loughborough, Exeter, Farnham, Wibourne, Harlow, Wakefield, Leeds and Redditch, before the final gig of the tour at The Core in Corby on Saturday November 26th 2011.

We have tickets available now for the remaining dates, priced around £18. The show is not suitable for under-16s.