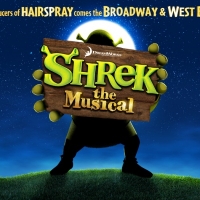 In 2001, DreamWorks released their against-all-odds, good-versus-evil family film "Shrek" - 'the greatest fairy-tale never told', to quote the promotional poster's strap-line. The story centred on a loveable green ogre (Shrek) who just wants solitude - he doesn't get it, due mainly to his quiet tranquil swamp residence being overrun by newcomers banished to the area by the decidedly shady Lord Farquaad. One of those fairy-tale newcomers is Donkey, who soon becomes a tag-along chum and stooge for the unfortunate Shrek who decides to plead with Farquaad to have his peace and quiet restored - cue many perilous adventures.

Shrek the Musical borrows heavily from the film's plot, offering an insight into Shrek's younger years with more songs and cheeky humour. During its West End run, it's gained plaudits from all over the press with the Daily Telegraph punningly exclaiming that the show is "Shrektacular" (I must remember that one).

Suitable for the whole family (minimum age is 5 yrs old for the mildly jumpy bits), Shrek the Musical features Girls Aloud's Kimberley Walsh as princess Fiona and comedian Richard Blackwood as Donkey, amongst many others.

The enchanting show is set to run at the Drury Lane Theatre Royal (near Holborn) until October 2012 and tickets can cost in excess of Â£82 for the best seats - however, we have a limited offer that might make others as green-eyed as Shrek himself.

The Special Offer is: For Wednesday and Thursday performances (including Thursday matinees), you can buy family tickets (2 adults + 2 children) from Â£96 for upper circle seats and Â£147 for stalls/ circle seats, with the option of adding extra children. Quite a saving when you hear that standard tickets range from Â£19.25 (balcony - restricted view) to Â£94.25, with stalls tickets coming in at Â£64.25!

The offer runs until 25th October - click on the Book This Offer button below to check availability and book your tickets.