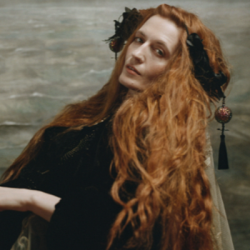 If Florence Welch's explosion onto the music scene was a bustling, daredevil, starburst of drama and colour, her subsequent activity has been rather more sober.

It is now over two years since she scooped the Critics' Choice award at the BRITS and saw her debut album 'Lungs' nominated for the 2009 Mercury Music Prize before parking itself stubbornly in the top two slots of the UK album chart for over year.

Welch's charismatic, theatrical style made for some raucous and wonderful live performances and 'Lungs' breathed life into many a music collection. A generation of girls thought about going red.

With comparatively intimate venues on the agenda, any chance to see 'Flo' was gobbled up by an avaricious public, gorging itself on a true British talent and her beguiling soundscapes.

After such an introduction, Florence and the Machine's second album, 'Ceremonials', must not be allowed to slip into the party unnoticed. Helpfully, Ms Welch has seen fit to arrange an album launch gig in London later this month.

The new album will be released on 31st October and is a guaranteed No 1 album. Six days earlier, on Tuesday 25th October, Florence, Machine et al will be previewing the new material and, no doubt, highlights from 'Lungs' at the Hackney Empire.

Tickets will be available exclusively via the band's website from 9AM on Friday 14th October . Right here, in fact: http://tickets.florenceandthemachine.net/

Predictably, tickets for Hackney have sold out in a matter of minutes.