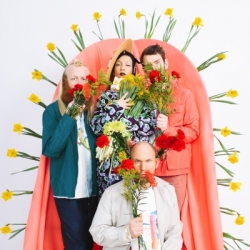 If Yukimi Nagano is a name that means little to you, then most likely within the next 12 months, it probably will. In fact, the current lead singer of the Swedish avant-garde electronica and beat-pop outfit, Little Dragon, has been around for longer than you might imagine. She's appeared on another Swedish act's releases in recent times, the nu-jazz and chill-out duo, Koop, has also teamed up with drummer Erik Bodin for various shows with José González and has appeared on Gorillaz' last opus, "Plastic Beach".

But since the mid-'90s, her time has been devoted mainly to Little Dragon, although it took a decade for the band to get their first release out of the traps, the 7"-only "Taste/ Test". Since then, life has been good to the Gothenburg quintet, with this year's rather fetching album, "Ritual Union", the title-track from which you can listen to above. Plaudits have been many - newspapers and online blogs have acclaimed it as "wonderfully unassuming" (BBC Online) and as having "Alluring simplicity" (Independent) and its chart position of number 22 suggests they may have 'legs' to go the distance.

This autumn's tour schedule is peppered with sold-out shows for Little Dragon, to the point where the band have announced another string of shows, this time for next year. First stop is Leeds on 23rd February, followed by Birmingham, Oxford, Liverpool, Manchester and Bristol. More shows may get added in due course - meanwhile, tickets for these are on sale from Friday onwards, priced at £13.50.

With regards to the 2011 shows, only Glasgow (30th Nov) and Shepherd's Bush have any face-value tickets left - the rest have sold out.