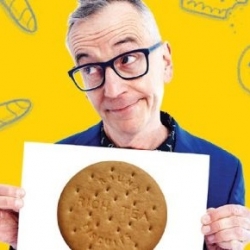 Mind your language, we used to be told at school, yet today's kids are positively encouraged to exercise freedom of speech. OK, the words "innit", "like" and "you get me" do tend to get bandied round train carriages and bus-stops all too often, but language is language, even when mangled into some sub-urban babble - at least we're talking to each other, despite the onslaught of Facebook, Flickr, Twitter, Fumblr and MyBook, or whatever the flippin' thing is called this week.

News of a brand new literary festival in West London might also set tongues wagging - the First Direct Dialogue Festival, due to be held from 2nd to 5th November is, according to the organizers, "an exploration of why, in an increasingly digital and scripted world, human chatter matters. Themed and curated by key figures from the comedy and literary worlds, the festival offers four fantastic days of debate, banter, stories and performance, with thought-provoking, creative and inspiring displays of discussion and exchange." We couldn't have put it better ourselves - so we didn't!

More than just a big stand-up comedy festival, yet just as side-splitting and thought-provoking, the Dialogue Festival has been curated by leading figures from the world of the word. Three venues in the Notting Hill area will host four evenings of shows with five different themes, with Robin Ince of Uncaged Monkeys fame (with Prof Brian Cox) piecing together the first evenings' entertainment under the heading 'Debate'. Discussions, a literary 'death match' and Adam Buxton form part of the line-up, priced at £10.

Other nights include 'Technobabble' on 3rd Nov, curated by Richard Herring and featuring Perez Hilton and Josie Long (£10), 'Lyrical' on 4th Nov, curated by the 'Bard of Salford' John Cooper Clarke and featuring The Hip Hop Shakespeare Company and Tim Key (£10), 'Chatterbox' on 5th, curated by John Hegley and starring child-friendly shows and workshops and 'Banter' which stars Francesca Martinez, Dan Atopolski and author Will Self, amongst others (£10).

There are other debates and discussions earmarked for the schedule, all of which have tickets for free, £5 or £10 (all of the Earl of Portobello dates are free, including one with resident poet at Theatre Royal, Stratford East resident poet Kat Francois ). See below for details and tickets (the free events are also ticketed).