Got Game? Get November 2011 UK and Ireland tour tickets when they go on sale on Friday 7th October 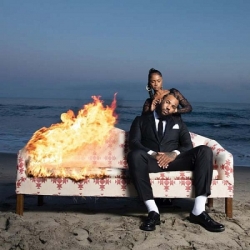 Jayceon Terrell Taylor, a.k.a. Game, is a rapper from the now legendary neighbourhood of Compton in California. From that, you might hastily conclude that he is covered in tattoos, has a criminal record, probably for a firearms offence, has been named in a lawsuit in relation to some violent crime or another and yet in spite of this, has sold millions of albums.

Well, shame on you for rushing to judgement. But, yes, you'd be more or less right. And for many, this cliché is all that they will see. They'll probably mention 'gangsta rap' and violence in video games and tell you that the whole world has gone to hell in a hand cart, whatever one of those is.

But Game has tales to tell and people have always loved storytellers. As a member of G-Unit, Game released his first album of stories from the street, 'The Documentary', in 2005. It spawned two US Top 5 singles and reached the top of the Billboard album chart. It also sold five million copies worldwide. The follow-up, 2006's 'Doctor's Advocate' was just as strong, shipping four million units and again hitting top spot in the US.

In fact, only the third of Game's albums, 'LAX' failed to reach No 1, held off top spot by Slipknot's 'All Hope Is Gone'. All his records, including the latest, 2011's 'The R.E.D. Album' have made the UK Top 20. This phenomenal success, alongside a series of mixtapes, independent releases and collaborations, with the likes of Chris Brown, Kanye West and Lil Wayne, have all earned Game a reputation as an edgy, relevant, real-world rapper who is in demand everywhere.

Next month, Game will be returning to these islands for the first time in two years to finally tour the delayed 'The R.E.D. Album'. The UK and Ireland tour kicks off at the Olympia Theatre in Dublin on 20th November, followed by shows in Newcastle, Manchester and Birmingham, before the final gig of the short run at the HMV Forum on 26th November.

We will have tickets for all shows - the UK gigs go on sale at 9AM on Friday 7th October, priced £29.50 for London, £25 for all other UK venues. Tickets for the Dublin date are on sale now, priced 43.