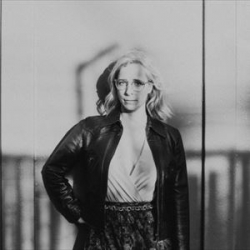 They say that when you have kids, your whole life changes and your outlook and lifestyle mellows out. Laura Veirs has certainly been affected by the birth of her son, Tennessee, so much so that she's recorded an entire album of American children's songs, citing the young addition to her family as part of the inspiration. But that's not the whole story.

On her website, she explains that 'countless fans have told her over the years how much their kids love her records'. The idea that young children have been tapping their feet to Veirs' critically-acclaimed folk/country stylings, might seem preposterous, but listen closely and you get the impression it's very true.

So, rather than re-record her award-bothering masterpieces "Year of Meteors" and "Saltbreakers" using a Speak-and-Spell© machine, she's opted for a more organic and archival approach. "Tumble Bee", out in November, gathers up classic American children's folk songs, originally recorded by Woody Guthrie, Peggy Seeger and the like and given them a Veirs finish. The winning formula has been topped-off with guest appearances from Jim James (My Morning Jacket), Bela Fleck and more and is described by Veirs' partner, Tucker Martine as 'songs that have been forgotten throughout the years,' says Martine, 'we wanted to bring these beloved songs to a new generation with an instrumentation that both honors their traditions and creates something unique.'

You can witness this uniqueness when Veirs comes to the UK in 2012 for a series of headline shows. Stops include London's Queen Elizabeth Hall on 30th January, Nottingham, Salford, Gateshead and finally, Birmingham on 4th Feb.

With the exception of London, tickets will be on sale from Monday 3rd October, costing £10. Tickets for the Queen Elizabeth Hall gig are on sale now, priced £17.50 from the venue directly.