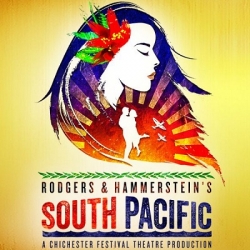 Sometimes even classics can benefit from a shot in the arm and this is exactly what the Lincoln Center Theater in New York has done with one of Rodgers & Hammerstein's best-loved musicals, South Pacific.

Reinventing the tale of love on a World War II tropical island naval base won the not-for-profit theatre company a sideboard full of Tony Awards, a sold-out two-year Broadway run and a television broadcast of the show across America.

Despite the overhaul, it is the Rodgers and Hammerstein score that remains South Pacific's ace in the pack with numbers like 'Happy Talk', 'Some Enchanted Evening' and 'I'm Gonna Wash That Man Right Outta My Hair' known the world over.

Having played to packed houses at the Barbican for the last six weeks, South Pacific is now heading out on a much anticipated UK tour. Directed by Bartlett Sher, the tour cast includes Samantha Womack (Eastenders, Game On) as Nellie with Paulo Szot and Welsh National Opera singer Jason Howard sharing the role of Emile. Audiences may also spot a familiar face in Alex Ferns, who plays Luther Billis, and who many will recall from his time on Eastenders.

The smash-hit Lincoln Center Theater production of Rodgers and Hammerstein's South Pacific finishes its Barbican run on Saturday 1st October before heading off out on tour.

First stop is Milton Keynes with 10 dates from 12th October, before visits to Manchester, Glasgow, Bristol and Oxford. The New Year begins with shows in Southampton followed by Birmingham, Liverpool, Stoke, Wimbledon, Edinburgh and, finally, from 1st to 12th May 2012, the Sunderland Empire.