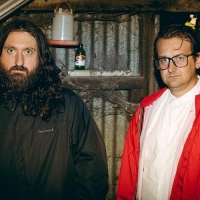 The Young Knives may not be as fresh-faced as they once were but, after something of a creative hiatus prior to the release of their third full-length album, April's 'Ornaments from the Silver Arcade', it seems that they are back in the game.

Whether they struggled with the weight of expectation (as so many do) after their second record, 'Voices of Animals and Men', was nominated for the Mercury Music Prize in 2007 or if they just slowed it down is not clear. But, having toured their successful second album 'Superabundance', they spent 2009 and 2010 being very quiet indeed.

Not to worry, the tweeded trio wheeled out their latest LP in the spring and, after a short tour to promote the album and a handful of summer festival appearances, Young Knives have named their autumn tour after the next single from the new record, 'Vision In Rags', which was released earlier this month.

The tour is set to take in some of the UK's 'less visited towns', with the band saying on their website that they have picked "some of our favourite UK venues and a few new ones that look like they might be a hoot." The tour promises a selection of material from the old and new records and a sneaky a preview of new stuff they're already lining for the next album.

The autumn Vision In Rags tour kicks off at The Deaf Institute in Manchester on 20th October, followed by dates throughout October in Fife, Edinburgh, Derby, Wrexham, Liverpool, Bath and more. November begins with a date in Reading on the 1st, followed by stops in Tunbridge Wells and finally Wolverton on Thursday 17th November.

We have tickets available now for all dates, priced £8 to £12, with the exception of 29th October in Liverpool [part of Liverpool Music Week 2011 - Ed]; tickets for which go on sale at 9AM on Friday 30th September.