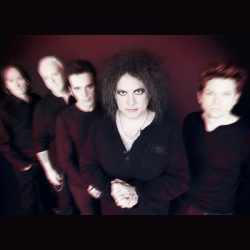 Crawley in West Sussex - not the most musically-thrilling town in England, it has to be said. The late Simon Jeffes of Penguin Café Orchestra fame was born there and numerous members of The Feeling went to school in the town but, apart from Robert Smith, Michael Dempsey and Lol Tulhurst striking up a musical friendship during the mid-'70s, you're more likely to head out of town to see live music in Brighton or London, than hang around waiting for the next big thing.

Which is a shame because, as big names go, The Cure were, in the '80s and '90s, a pretty good provincially-created flag to wave in people's faces, when they chose to slag the town off. Let's just say that Smith's charges didn't inspire many other kids to pick up instruments and sing in support of the place. Besides, Robert Smith and co were too busy having heavily made-up guys and gals fall at their feet, choosing to emulate their idols with spikey, wirey black hair and THE tightest drainpipe trousers ever.

With their Bestival appearance out of the way, The Cure's next intriguing show at the Royal Albert Hall on 15th November promises to be a special evening. The band will be reviewing their first three albums in their entirety (with added 'encore favourites' for good measure), neatly divided into sets and promising over two hours of top-notch music in wonderful Gloom-a-scope©. Tickets are on sale from Friday, priced from £20 to (cough) £150 (which, for that money, should involve Robert Smith making you a cocktail and reading a bedtime story!). Whatever you pay, the experience will be unforgettable, due mainly to their choice of playlist.

Their first two albums, "Three Imaginary Boys" and "Seventeen Seconds" and the accompanying non-album singles contained shorter, more satirical songs, particularly on the literary Albert Camus-inspired "Killing an Arab" and near-pop sparkler, "Boy's Don't Cry". But darker efforts such as "A Forest" and "At Night", both from "Seventeen Seconds", pointed the way forward to their (eventually) very large (global) audience.

Indeed, before the pop-froth of "The Lovecats" and "Close to Me", you had the darkness. Put it this way - if you feel elated after listening to third album "Faith", you are clearly a Cure fan and clearly in need of a cuddle - it makes Joy Division's "Closer" sound like a Ministry of Sound album, such is its dour lustre and depressed mood. It's also rather excellent, of course. The last album set will also feature original drummer Lol Tolhurst on percussion and keys. Enjoy!