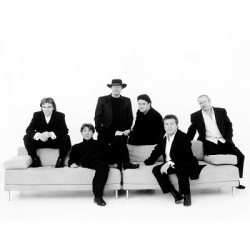 Long before The Smiths, the Stone Roses, the Buzzcocks, the Happy Mondays, James, Joy Division, the Inspiral Carpets et al helped cement Manchester's reputation as a musical and cultural vanguard, a common ancestor was already two decades or so into a career like few others.

The city's first 'boy band' was not Take That, not even The Bee Gees or Herman's Hermits, it was The Hollies. Fifty years ago, five lads formed a band that continues today. In half a century's continuous service, the line-up has of course changed but two of the current members, drummer Bobby Elliott and guitarist Tony Hicks, have been in The Hollies since 1963. Bassist Ray Stiles has been in the band for close on 25 years and keys man Ian Parker more than 20 [Johnny-come-latelies eh? - Ed].

Now a six-piece, The Hollies are the absolute definition of a sixties' pop group whose music and popular appeal has rarely dipped in 50 years. The songs have helped. Tracks like 'Just One Look', 'Carrie Anne', 'Sorry Suzanne', 'He Ain't Heavy, He's My Brother' and, a king among love songs, 'The Air That I Breathe' have seen The Hollies find a place in the heart of a nation.

What's more, they've out-lasted and out-sold most of the illustrious names above. And there's still more work to do, it seems, with The Hollies touring the UK throughout an extraordinarily busy October.

Following dates in Scandinavia and Ireland, the UK dates kick-off on Southsea on Friday 30th September, followed by a hectic October, taking in Wimbledon, St Albans, Oxford, Cardiff, Salford, Harrogate and many more before the final date in Stoke on 30th October 2011.

And they're not stopping there - a date has already been announced for 2012 with The Hollies visiting Perth on 19th April.

We have tickets for most dates available now, with prices starting at around £20.