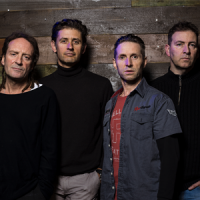 The late '80s proved to be a transitional time for the British music scene - Acid House had arrived, indie labels were becoming major-label-minded and grasping for hits, while major-labels were trying to be all indie, bless them. EMI, as iconic a British empire as you could possibly get, dabbled with offshoot-labels quite often, one of which was Food Records.

Founded in 1984 by Teardrop Explodes musician and record-label guru (he ran the seminal Zoo imprint in the post-punk era) David Balfe, Food basically handled the acts that EMI couldn't or didn't know what to do with (yet) and eventually became a spawning ground for creative souls who, in a few cases went on to bigger things. Brilliant featured KLF's Jimmy Cauty, Voice of the Beehive notched-up a handful of hits, Diesel Park West and Crazyhead notched-up a few fans (but no hits to speak of), while Jesus Jones beat Blur to the glittering prizes by a few months.

However, while Damon and co amassed global acclaim and a pile of successful albums and hits, Mike Edwards' gritty skaters with a penchant for bright colours and sample-heavy electro, fizzled and burnt out within six years. Too pop to be 'grebo', too fun to be 'industrial' and too good to be EMF, during that time they chalked-up a string of chart-hits and cult-hits such as "International Bright Young Thing", "Info Freako", "Real Real Real" and "Bring it on Down", plus a trio of albums that included "Doubt", a #1 success.

It's been 14 years since their last (minor) success, "The Next Big Thing" (it wasn't), but now they are back with a reunion and the possibility of new material in 2012 - but not before two huge shows in the autumn, a precursor to a longer UK tour next year.

First stop is Birmingham's HMV Institute on 1st November, followed by a show at Islington's O2 Academy on the 2nd. Tickets for Birmingham go on sale from midday today (Fri), with Islington going up on Monday morning at 9am. Ticket prices start at £15 (slightly more for London) and demand will be pretty darned reasonable - both the band and member Iain Baker have been pretty busy mentioning it on networking sites for some time now.