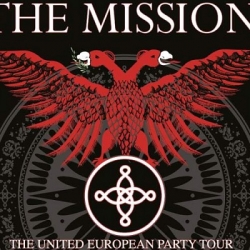 In 1990, in middle England, a war was raging in Mr Tomblin's chemistry class. We may have been the lower of two sets and not known quite enough about ionisation energies to get through our A level, but we knew our music.

At least we thought we did. That we would often be told off for bickering about who was best, The Mission or the Dogs D'Amour, perhaps suggests otherwise. Admittedly, there may even have been one or two in the set who were oblivious to this unseemly and all-consuming conflict, such as Mr Tomblin himself (plainly a U2 fan).

Anyway, Melody Makers and NMEs were cut up and copydexed onto our folders with our latest musical heroes, The Mission's Wayne Hussey and the Dogs' frontman and founder Tyla, taking pride of place.

In the short term, folder sabotage and one lad dropping chemistry altogether meant that The Mission prevailed. Too many years later, it turns out that neither The Mission nor the Dogs D'Amour, not even The Quireboys, changed the world. But, thankfully, all three are still eking-out careers reliving the glory days of Mr Tomblin's War.

The Dogs D'Amour have even put out new material in recent times. Led by the band's only ever-present, Tyla, the Dogs released 'When Bastards Go To Hell' in 2004 and 'Let Sleeping Dogs...' (named after the Mission song?) a year later. The records were, in truth, more or less solo outings for Tyla under the Dogs name.

The band continues to tour, and their brand of dark, glam British hair rock continues to find an audience, even if the band no longer divides sixth form chemistry classes.

The Dogs D'Amour are playing the Islington Academy on 4th December, followed by Oxford, Liverpool, Newcastle and the Birmingham Academies.

We will have tickets for all shows when they go on sale at 9AM on Monday 26th September priced £12, except London which will cost £14.

Ahead of that, the Dogs D'Amour play The Corporation in Sheffield on 26th November - we have tickets available now for £12.

For the record, I got an 'n' in my chemistry A level, which was still better than I did in maths.