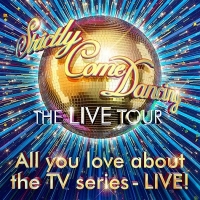 The latest line-up of celebrity dancing wannabes for Strictly Come Dancing may have only just been announced but before a fox has been trotted or a heel turned, thoughts are already turning to the subsequent live tour.

Since its launch in 2004, 'Strictly' has become a global phenomenon spawning versions in countries all over the world and becoming a regular fixture in the UK autumn TV schedules. Striking an uneasy peace with ITV's 'The X Factor', the two giants manage to co-exist, between them dominating the tabloids and water cooler chat for the three months or so until Christmas when we can all have a lie down and some chocolate.

Even those who avoid Strictly will be aware of the stories that have emerged, whether it be a couple doing more than the American Smooth together or the inept performances of one public figure or another. This year's lambs to the slaughter include the usual quota of sports stars, soap actors, politicians and one or two the viewing public may not be so familiar with.

Highlights of the 2011 TV show will include Latin and ballroom routines from the likes of boxer Audley Harrison, Aussie pop star Holly Valance, former politician Edwina Currie and one-time Old Vic landlady Angie Watts, actress Anita Dobson. Many of the dancers and judges of the show are arguably now as famous of the celebrities and the tour will feature many of the programme's favourite professionals as well as being directed by judge (and choreographer) Craig Revel Horwood.

The massive 2012 Strictly Come Dancing tour kicks off at the NIA in Birmingham on Friday 20th January for five nights, moving onto a couple of dates in Nottingham before a show at London's Wembley Arena and then four at the O2. The tour then takes in two dates at the MEN Arena before huge arena shows in Sheffield, Liverpool, Newcastle, Glasgow, Cardiff, the Dublin O2 and finally five dates at Belfast's Odyssey Arena from 24th February 2012.

All venues except Wembley have more than one date scheduled, in a tour that is likely to play to a total audience in excess of half a million.

We will have tickets available for all dates when they go on sale at 9AM on Thursday 29th September 2011, prices starting at around £35 depending on venue. The Dublin tickets are priced from 45.