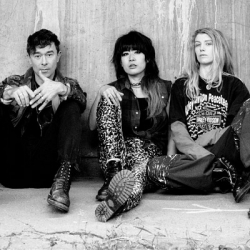 The fortunes of 4AD, the enigmatic and glossy indie based in the unlikely surroundings of Wandsworth in Sarf Lundon, have improved greatly in the past decade, with The National, Bon Iver and the catalogue of earlier signings, The Pixies and Cocteau Twins still ringing Amazon, HMV and Rough Trade's groaning tills, some time later. You get the feeling that when the High Street chain in the above trio sinks without trace, the label's product will continue to sell somehow, such is its lasting legacy and despite much of their stock being wiped out by THAT fire at the distribution warehouse in Enfield, last month.

Further down the pecking order on 4AD's roster are The Big Pink, who have issued just one album, 2007's "A Brief History of Love", and a quintet of musically virile singles, including the thrash-glam electro Top 30 smash, "Dominos". Although the album vanished from most people's radar within a month or so, it stands up as a sonically-sharp work, for which you have to remember one key thing - it was Robbie Furze and Milo Cordell's debut set.

It's almost the end of 2011 and, four years after that opening gambit, the time is right for the all-important sophomore follow-up due for release in early 2012, preceded by a single "Stay Gold" (which you can watch above) and a UK tour.

The single will be released on 7th November, the same week the tour commences, beginning on 11th at the Classic Grand in Glasgow, followed by Leeds, Manchester, Liverpool, Southsea, Brighton, Birmingham, Nottingham and Bristol on the 22nd. We will have tickets from 9AM on Friday, priced at £10.50. Support for all dates except Leeds comes from 2:54. Expect a London show to be announced soon.