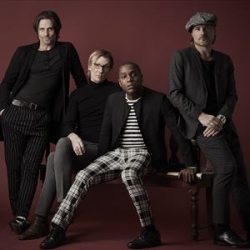 'Vintage' usually (not always accurately) implies old, or second-hand. It is not usually appropriate for describing an overnight sensation, but US funk-soul outfit Vintage Trouble are exactly that.

Formed in Los Angeles as recently as early 2010, the debut record from 'VT', last year's 'The Bomb Shelter Sessions' was an immediate hit. An appearance on BBC2's 'Later... With Jools Holland' and a handful of UK dates in early 2011 helped the debut record to No 26 in the UK album charts.

The clip of the band playing 'Blues Hand Me Down' on Jools Holland's show, complete with a mesmerising performance from frontman Ty Taylor, had audiences captivated and has registered more than 100,000 YouTube hits and iTunes saw a surge in sales of 'The Bomb Shelter Sessions'.

Soon the band found themselves working with Queen legend Brian May and then supporting none other than hair rock giants Bon Jovi on the UK leg of their Circle Tour and just a month later selling-out a summer UK tour. All of which began in a brand new home studio in Venice Beach, California, barely a year earlier.

Off the back of this incredible flight, Vintage Trouble will be returning to these shores once more later in the year.

Vintage Trouble have extended their November UK and Ireland tour to 15 dates, beginning at the Rescue Rooms in Nottingham on the 10th, taking in Sheffield, Manchester, Inverness, Edinburgh, Belfast, Dublin, Preston and more, before the final gig of the run at London's Electric Ballroom on Tuesday 29th November.

We have tickets available now for 12 of the gigs, priced from as little as £6. The recently announced remaining three shows are Belfast, Dublin and London, tickets for which will be available from 9AM on Friday 16th September priced £14.50, 13 and £15 respectively.

Clearly, Vintage Trouble like the UK, with three dates just added for December! The guys will now be stopping-off at Norwich, Oxford, Bristol and Liverpool between 14th and 20th December. Tickets for the Norwich and Bristol datse are on sale now, with tickets for Liverpool and Oxford going on sale Monday 19th September at 9AM.