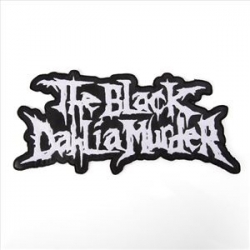 Sometimes in metal and rock, it's best to keep things short and sweet, especially with album-titles or band names. Currently, there is a high degree of faffing when it comes to monikers - Bring Me The Horizon, A Day To Remember, The Axis Of Perdition and Calamity Reigns Supreme My Holy Master (OK, I made that last one up) - whilst decision-making over what to call your latest treasure-trove of angst-powered anthems, occasionally turns into a thesaurus-trawling epic, ending with the dramatic ("Destroyer of Worlds" - Bathory), devilish and fantastical ("Towards the Skullthrone of Satan" - Enthroned) or just plain sick ("Chainsaw Charlie (Murders In The New Morgue)" - WASP).

The Black Dahlia Murder have also obviously spent a little time over their distinctive name. Inspired by the true-story of a grizzly unsolved murder of a woman in Los Angeles during the late-'40s (she was sliced in half at the waist), founder-members Trevor Strnad and Brian Eschbach were clearly moved enough to borrow the nickname of the victim (as dubbed by the national newspapers) and apply it to their own uncompromising quintet.

The names of their albums are mercifully far shorter and simpler, such as "Unhallowed" and "Nocturnal", the latter being their first Billboard Top 100 success, with 2011's "Ritual" continuing the pattern of concise, yet dark, composition. The album has been a hit in the US and shows the band in a more song-structured light than before with many songs clocking-in at under 4 minutes (including the wonderfully-titled "Great Burning Nullifier").

To support the album, The Black Dahlia Murder will be hitting the UK during early 2012 with support from Skeletonwitch and Fleshgod Apocalypse, kicking-off with a double-date blast at Camden's Underworld on 11th and 12th January (£15). Other stops during the month-long stint include Norwich, Birmingham, Manchester, Leeds, Plymouth and loads more until the unlikely final date in Margate on 31st January. Tickets for these regionals start from £12 and are expected to sell well when they go on sale at 9am tomorrow - with the exception of the Dundee date, tickets for which go on sale at the stroke of midnight, tonight.