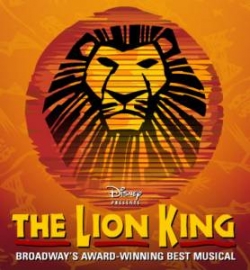 The story of Disney's The Lion King first emerged in the 1994 film of the same name. Set amid the Serengeti Plains of Africa, the Lion King told the musical story of the cub Simba ('lion' in Swahili) and his odyssey to become King of the Pridelands.

Unusually for Disney, it was touted as a completely original story (a notion since challenged), influenced only by the powerful rhythms of Africa, the Bible and Shakespeare's Hamlet, with Simba as its prince.

The film became the poster boy for the so-called Disney Renaissance, which saw a resurgence in popularity of the studio's (then) trademark hand-drawn animated fantasy cinema. Alongside worldwide hits like 'Aladdin', 'Hercules' and 'Pocahontas', The Lion King helped rescue the Disney brand, becoming the highest-grossing animated motion picture of all time - a record it held until Disney/Pixar's 'Finding Nemo' came along in 2003.

The Lion King was a now familiar tale of action, adventure and wide-eyed anthropomorphic wild animals battling bravely against adversity; in this case those vile, conniving hyenas. Formula aside, The Lion King was clearly a huge hit, lifted by the musical contributions of Sirs Elton John and Tim Rice.

Somewhat inevitably, it quickly made the transition to the stage, having its debut in Minneapolis in 1997 before moving onto Broadway where it became the seventh longest-running show in Broadway history. The West End premiere followed in 1999, where it continues at the Lyceum Theatre having scooped a clutch of Olivier awards in the process.

Disney presents the Lion King at London's Lyceum Theatre will be taking bookings for shows from Tuesday 3rd April 2012 until Sunday 9th September 2012 when tickets for the new dates go on sale at 10AM on Friday 16th September 2011. We will have tickets for all performances, priced from £30 to £60 for the best stalls.

Ahead of the new dates being released, tickets are still available for the majority of performances from now through to April 2012, priced £25 to £59.50.