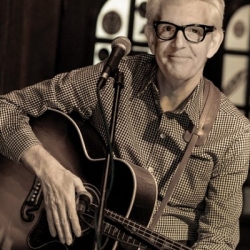 You never hear Nick Lowe mentioned on The X Factor, something of an oversight given the extraordinary high regard in which the industry holds the English singer-songwriter and producer.

After forty years in the business, Lowe has rarely gone more than three or four years without releasing a well-received album of his trademark English rock. Right on cue, the man who produced Elvis Costello's first five albums is set to release his 13th studio LP, 'The Old Magic', on 13th September 2011.

Nick Lowe is, by his own design, something of a sleeping giant of British rock and pop, having deliberately moved away from the kind of mainstream music that would get played on network radio. Consequently, Lowe's legend lives on not in smash-ITV talent shows but in the shadows of the nation's ale houses, and in the dusty corners of record collections everywhere. And, sometimes, on Radio 2 at night.

The legend speaks of Lowe's direct, uncomplicated style to music production (and life), his quiet humour and how there are so very few traditional songwriters of his calibre around these days. But, for those in the know, things are looking up. Lowe is taking 'The Old Magic' on a tour of the US and Canada later this year and early next, before a string of European dates beginning in February.

Tickets for his February dates are on sale now (Edinburgh went on sale this morning), with the March dates going on sale tomorrow morning (Saturday 10th September at 9AM), priced around £25/ £27.50 (£32.50 for London).

Ahead of the UK dates, Nick Lowe will be at Vicar Street in Dublin on 15th February 2012. We have tickets available now priced 39.