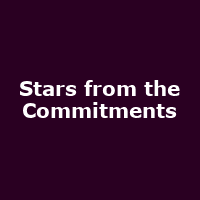 In 1991, as the world was kicked from its 80s hair-rock stupor by the teeth-rattling grunge of Nirvana, Alan Parker's film of Roddy Doyle's book 'The Commitments' provided a cultural counterpoint with its soul and blues soundtrack.

Featuring hits from Wilson Pickett, Aretha Franklin, Otis Redding and other soul and Motown legends, the soundtrack release spurred a summer of barbecue sing-alongs and speculation about whether the actors themselves performed all the songs. Apart from one or two tracks sung by Niamh Kavanagh (subsequently a Eurovision Song Contest winner for Ireland), all the music featured was authentically performed by Deco, The Lips, Bernie, Imelda Quirke et al.

Off the back of the film's considerable success, including BAFTAs and both Golden Globe and Oscar nominations, there was an insatiable appetite for the music and its performers. A number of 'Commitments' bands sprung up, some simple tributes, others featuring one or two of the actors alongside a new band.

But, 20 years after the film's release, a huge chunk of the original cast have got together for a series of anniversary concerts which are continuing into 2012. The cast has experienced contrasting fortunes since The Commitments but all will be forgotten as the ensemble reprises the music from the film as a group, for possibly the last time.

After a handful of dates in 2011, The Stars from The Commitments are returning with three UK dates in early 2012, beginning at the Braehead Arena in Glasgow on Thursday 15th March, followed by the Liverpool Echo Arena the next night before the final date at The O2 Arena in London on 17th March (St Patrick's Day, no less).

We will have tickets for all shows when they go on sale at 9AM on Monday 12th September, priced from around £40.

Ahead of the UK shows, the band will be performing two special 'hometown' shows at the Olympia Theatre in Dublin on 9th and 10th November 2011.

We have tickets for the Dublin gigs are available now, priced from 53.