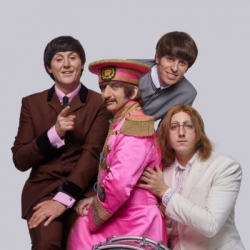 Some 'tribute bands' are little more than a clever pun, touring the pub and club circuit. Others somehow transcend their 'tribute' status to become successful bands in their own right, despite usually having never written or recorded any original material. Like Abba tribute Björn Again, or The Bootleg Beatles.

Treading a careful path between impersonation and musicianship is the biggest challenge facing tribute acts. The best, like The Bootleg Beatles, tend to focus on the music and vocal similarities with just a nod to physical likeness.

The Bootleg Beatles have been performing the hits of Lennon and McCartney to audiences around the world since 1980, and have now been together more than twice as long as the Fab Four they worship. Neil Harrison, Andre Barreau and David Catlin-Birch were cast members in the West End show 'Beatlemania' when they decided to take things a step further. 'John', 'George' and 'Paul' soon recruited Rick Rock as Bootleg Ringo and started playing a few gigs.

Thirty or more years since breaking out of the West End, The Bootleg Beatles are still going strong. Nonetheless, it was something of a shock earlier in the year when 'Bootleg John' and mainstay Neil Harrison signalled his departure from the band. It was announced in July that his replacement would be Adam Hastings.

Luckily for Adam, he probably already knew most if not all of the songs that make up a typical Bootleg set. Not that they scrimp on material. Not at all. Each show is a chronological musical journey from Beatlemania in 1963, through 'Sgt Pepper' to 'Let It Be' and the band's legendary rooftop finale.

With a new John, The Bootleg Beatles have announced a series new dates continuing the current tour. In December, in addition to Newcastle City Hall, Hammersmith Apollo and the NIA in Birmingham, The Bootleg Beatles will also now be playing Brighton on 4th December, followed by shows in Cardiff, Bristol, Liverpool, Edinburgh and two nights in Glasgow.

The tour resumes in March 2012 in Croydon, taking in Crawley, Sunderland, York, Oxford and loads more before the last date of the current run in Basingstoke on 30th March 2012.

We will have tickets for all of the new dates when they go on sale at 9AM on Friday 9th September, priced around £25. We also have tickets available now for the previously announced December shows.