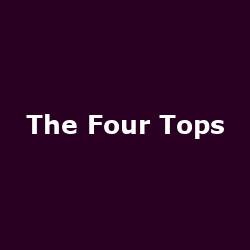 The Four Tops have long been torturing pub quiz teams everywhere as quirkily-named collectives dissolve into disarray over whether it was The Four Tops, The Temptations or The Drifters who sang 'Just My Imagination'.

Although these bands have much in common, in truth each has made its own unique and invaluable contribution to pop and soul history. If anything, The Four Tops have been the most exceptional exponent of Motown pop and its most consistent, long after the foursome had left the label.

And, unlike many of their contemporaries - and many pub quiz teams - The Four Tops did not became irretrievably divided over musical differences, or anything else. The original line-up of Levi Stubbs, Abdul 'Duke' Fakir, Lawrence Payton and Renaldo 'Obie' Benson stuck together for more than four decades until ill-health intervened in the late nighties.

By then, The Four Tops had notched-up a peerless collection of worldwide soul hits such as 'Reach Out I'll Be There' (number 1 in the US and here), 'I Can't Help Myself (Sugar Pie Honey Bunch)' and 'Standing in the Shadows of Love'. After those mid-sixties smashes, the quartet kept hitting the highs with tracks like 'Walk Away Renée' and 'Loco in Acapulco', charting into the late eighties.

In 1997, Peyton passed away and The Four Tops continued briefly as the rather sad sounding 'The Tops' before Theo Peoples, formerly of The Temptations (!) stepped in. Stubbs suffered a stroke in 2000 and Benson succumbed to cancer in 2005. After Peoples left the outfit earlier this year, the current line-up is now founder Duke Fakir, Roquel Payton (son of Lawrence), Ronnie McNeir and Theo Peoples' replacement Harold 'Spike' Bonhart.

Despite the personnel changes, Payton Jr and Fakir ensure a genuine level of credibility even though it is now 58 years (fifty-eight!) since The Four Tops first got together. And they are still working hard and touring the world, there are even rumours of new material.

Supported by The Temptations (!!), Tavares and The Crystals, The Four Tops begin their 2012 UK tour at Sheffield's Motorpoint Arena on Friday 16th March, followed by arena dates in Newcastle, Glasgow, Nottingham, Birmingham, Manchester, Bournemouth, Cardiff and Liverpool, before the final show of the run at London's O2 Arena on Wednesday 28th March 2012.

We will have tickets for all dates when they go on sale at 9AM on Friday 9th September, priced £42.50 for Greenwich and £40 for all other venues.

'Just My Imagination' was by The Temptations, by the way. But then you knew that all along.