The Less You Know, The Better? Not when DJ Shadow announces a winter 2011 UK tour! 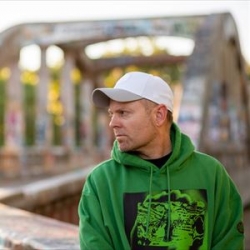 It's rumoured that one Josh Davis has a record collection nudging the tens of thousands mark - that's units, not monetary value. It must take him a week to decide what to slap on the turntable, by which time he's probably given up and gone to a studio to make his own music. Under the DJ Shadow moniker, he actually hasn't made that many albums, but he's certainly put some of his record collection to good use on most of them.

One of Shadow's most notable works is the 1993 "In Flux" 12" on Mo Wax, a veritable cut 'n' chop cornucopia that weighs in at over 10 minutes long and sports a killer bass-line to boot. It probably ranks as one of the label's key trip-hop anthems and comes coupled with the minimal "Hindsight" instrumental. But his greatest earlier work was the excellent "Endtroducing" set from 1996 - suddenly students as well as chin-stroking wax-heads were relishing the landmark soundscapes, including the eerie "Stem" and the hazy "What Does Your Soul Look Like". The various remixes and smartly-packaged 12" issued at the time have ensured that Josh Davis' own work is also worth a few quid.

2011 sees his fourth full-length studio album hit the shelves, a month or so after the EP "I Gotta Rokk" and DJ Shadow will be plugging "The Less You Know, The Better" with a string of shows this week at the Village Underground in London (sold out) and the Warehouse Project in Manchester on the17th (£20 - selling fast).

Even better news is a November/December UK tour - he will be heading to Bristol on 28th Nov, followed by the usual suspects before heading back to London for an HMV Forum show on 9th Dec. We will have tickets from Friday onwards, all priced at £19.50 (£21 for the London show).